Mobile device manufacturers want to provide consumers with a natural and easy-to-use user interface that is as easy to use as paper and pen, while also providing the flexibility of a computer. This advanced feature helps manufacturers differentiate their products. The small pointed passive stylus with palm malfunction detection allows manufacturers to offer low-cost solutions that support new applications such as handwriting, editing, signature capture, and precision navigation. However, the implementation of these features also faces some challenges, and developers of passive stylus must meet a range of performance requirements for capacitive sensing technology on larger touch screens. Specifically, advanced algorithms and sensing methods are needed to detect small signals from the stylus, while eliminating the large unwanted signals caused by the user's palm. In addition, the device must be able to dynamically switch back and forth between the stylus and multi-touch input while maintaining a certain speed, accuracy and responsiveness to ensure an ideal user experience.

As capacitive touch screens become larger and larger, the use of writing devices like paper and pen becomes more intuitive and convenient. The most common way for manufacturers to support the stylus function is to use an active stylus or a passive stylus. Active styluses use electronic components that require a power source and transmit signals to the host device. The active stylus can support advanced features such as hovering, pressure sensing, button support, and erasing on the display. The passive stylus uses a conductive material that is equivalent to the extension of the user's body. The capacitive coupling of the user's hand supports the transmission of signals when the passive stylus touches the screen, and there is no active communication between the stylus and the host platform, so how to distinguish between the finger and the passive stylus is a problem.

In order to create a practical implementation that supports both finger and passive stylus operations, a number of different usage scenarios must be considered. For example, developers should consider the speed at which the system should switch between detecting finger and stylus input. Similarly, they define the system's reaction to the stylus before, after, or at the same time touching the screen. Other important factors include configuring the stylus to detect the stylus signal when it is close to the hand. Figure 1 shows an example of a state machine process under the stylus use case. 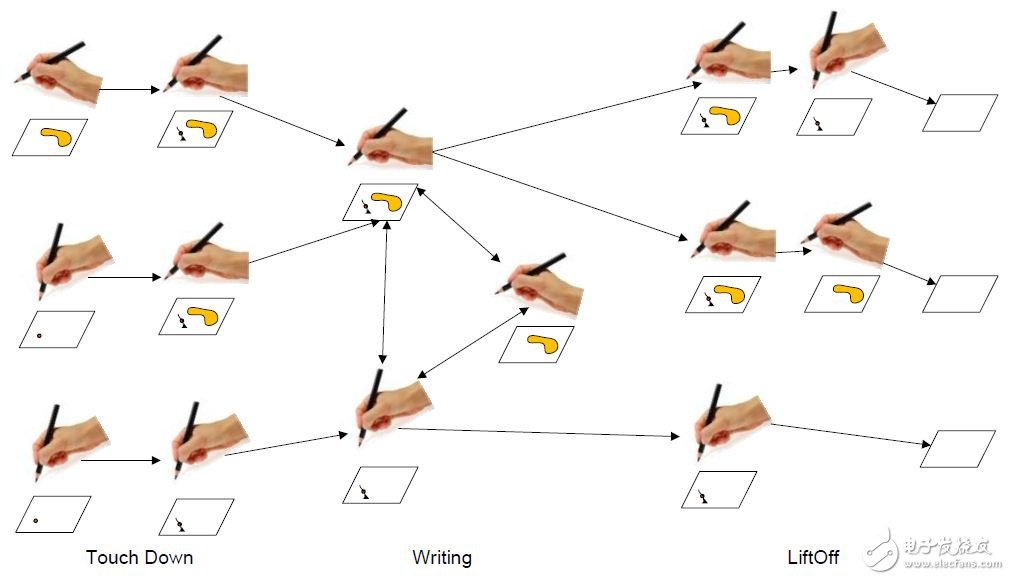 The paradox of stylus

Passive stylus detection is a complex issue for touch control engineers. The root of the problem lies in the "pencil paradox." The so-called "pencil paradox" means that the signal of the passive stylus is much smaller than the normal finger touch input, and the user thinks that the stylus tip is so thin that it should be more accurate than the finger.

Accuracy and linearity are directly proportional to the signal-to-noise ratio of the system. Since the noise floor does not change with the input, signal degradation can have a large impact on the signal-to-noise ratio. The signal level of a capacitive touch screen is basically determined by the coverage area of â€‹â€‹the touch input. That is to say, the signal strength of a 2 mm passive stylus is 25 times smaller than that of a typical 10 mm finger touch. This gap in signal strength creates many problems for touch engineers. Even with large touch signals, the firmware must be able to detect smaller stylus signals, which often requires different sensor scan modes, and both noise immunity and refresh rate are affected. In addition, passive stylus is best suited for use with larger touchpads, but large touchpads have low refresh rates or larger pitch sensors, both of which affect system performance.

Fundamentally speaking, dealing with the signal strength gap needs to solve two problems. First, although the signal strength is extremely low, the stylus must first be detected. Second, once the stylus is detected, an accurate report must be made. These two major problems have their own difficulties. Conceptually, the most reasonable stylus detection method is to maximize the sensor signal. The problem is usually solved by minimizing the dynamic range of the sensor to signal level (very close to the expected signal level) or even by using software multiplication and filtering. However, high gain systems are easily saturated by large inputs such as normal finger touches, so normal touch and smaller stylus signals must be handled with care. A common method is to perform two separate scans at each expected signal level to distinguish normal touches from the stylus input.

Figure 2 Introduction to touch and stylus

This mode switching is susceptible to error detection, so the error detection must be filtered out. A typical example is a finger approaching or leaving the touch screen. When the finger is close, its signal level is very low (in the passive stylus area), and the signal level is also low when leaving, so other judges must be used to confirm any detected stylus input.