In the construction of highways in mountainous areas, the proportion of tunnels is very large. The cost of using road tunnels after completion of traffic is quite alarming. Due to the underdeveloped economy in remote mountainous areas and the small traffic volume, the tunnel lighting costs have become a heavy burden for the highway tunnel management department. Especially in the first few years of operation, the tolls collected are not enough to operate maintenance expenses. How to improve the operational efficiency of tunnels and reduce energy consumption has become an urgent problem to be solved in highway construction.

Most of the existing tunnel lighting control adopts the timing control method, which mainly achieves the purpose of increasing or decreasing the number of working lamps by reversing different lighting circuits. Although this control method is simple and reliable, it does not fully consider the influence of environmental factors on tunnel lighting, such as weather conditions, tunnel ventilation conditions, traffic volume and vehicle speed control requirements, etc., which cannot fully meet the requirements of tunnel lighting and energy consumption. high. With the rapid development of semiconductor lighting technology, LED lighting lamps with high efficiency and energy saving have been increasingly used in tunnel lighting systems. Compared with the traditional light source, LED has the advantages of low voltage, low power consumption, high reliability and long life. It is an environmentally friendly and energy-saving green lighting source. In order to further develop the technical and economic advantages of LED lighting, when using LED as the tunnel lighting, it should pay attention to optimize the lighting design lighting scheme according to the actual situation, and improve the control strategy and control means. The driving power of the LED lamp can accept the dimming control signal, and the output current is controlled to control the light output of the LED lamp. This feature allows us to reduce the lighting energy consumption and improve the technical level of the system by adopting more sophisticated control technology. This paper will propose the realization and application of LED tunnel lighting control system from the perspective of perfect control strategy, comprehensively analyze the requirements and characteristics of tunnel lighting, and provide a complete solution for high-power LED tunnel lighting control system.

The structure of the LED tunnel lighting control system is shown in Figure 1. 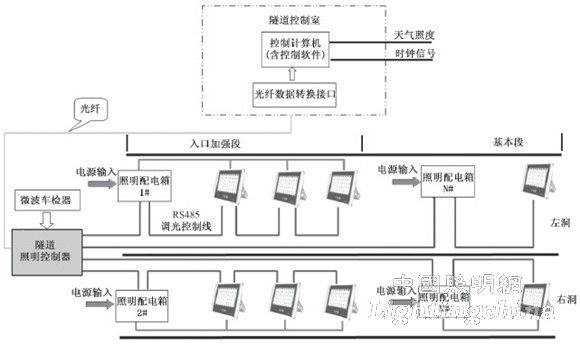 The system can perform single control for individual lighting or group control for regional lighting. The control strategy can be corrected at any time according to actual conditions, which can save a lot of power and effectively reduce operating costs. In addition, according to the security requirements of the tunnel, in the event of a fire, the system can also detect the condition of the rolling door and ventilation of the cross-hole in the tunnel.

The topology of the LED tunnel lighting control system is shown in Figure 2. 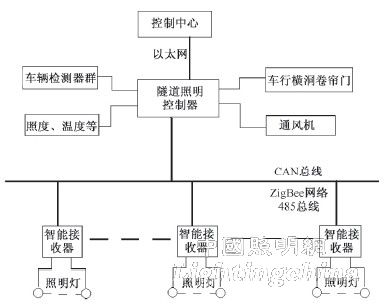 If the interface of the LED light intelligent receiving controller is RS485 bus type, the RS485 module of the tunnel lighting controller can be used, and the system wiring is as shown in Fig. 3. 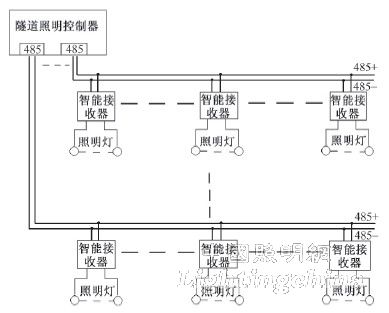 The wiring of the CAN bus and the RS485 bus are similar. The CAN bus has a complete communication protocol and is faster than RS485, and the nodes in the CAN network have an automatic shutdown output function in case of a serious error, so that the operations of other nodes on the bus are not affected.